We all feel drawn to it – the pulse, the rhythm, the serenity, the constant change in shape.

The trance-like charm of being by a river, lake or sea cannot be put into words. The ancient Greeks invoked the metaphor of flowing water as an allusion to the passage of time, to changing currents, as in life, as one of the truest constant elementary forces that leave us humble, and to fluidity, the past, present and future connects.

When we’re near water, we don’t have to pay for an app to deliver virtual rest on an iPhone or laptop. And there is a way to have easy access that can be shared across generations.

Dave Hall is called to the almost mythical rivers of Greater Yellowstone for a myriad of reasons. In addition to her almost sacred status as a fly fisherman and naturalist and the dynamic amalgamation of their aesthetic forms of expression, Hall as a painter sees rivers as meditations to reflect on the meaning of wildness. He paints in oil, but in a way is also a watercolor painter.

While many people dream of living near sections of the main streets of Snake, Madison, Yellowstone, Gallatin, Wind, Boulder, and Henry’s Fork – along with numerous smaller others – most don’t want to, but they can soak in the spirit of these revered lifelines apartments and offices bring their life to life through a hall painting.

This work, titled Harriman Morning, is not part of the Greater Yellowstone Suite art to enhance the great journalistic collaboration with Dave Hall, but it is an example of a work that has received national acclaim for the painter. The large original painting is in the collection of Union Pacific’s great-great-granddaughter, EH Harriman, after whom a popular Wildland State Park in Island Park, Idaho, in the western quadrant of the Greater Yellowstone Ecosystem is named.

In one of Hall’s tonal visions that convey moods like Mark Rothko in his banded color fields, a river can flow through the living room; it can bring a happy break into the foyer, spark an idyll late in the night before dreamtime, and, if this artist has his way, convince us viewers to think more heartily about what needs to be done to protect their corridors with liquid food holding the Greater Yellowstone together.

As part of a new collaboration between Hall and Mountain diary inviting people to think about how art can help protect wildlife, Hall sees journalism as an essential means of raising public awareness. Art by Thomas Moran and William Henry Jackson convinced Congress to found Yellowstone; decorative duck tags have saved millions of acres of wetlands; and it has advanced public support for environmental protection in ways it has done little else.

MoJo hopes to expand his coverage, and Hall enables those who appreciate the art to help make it happen as part of what he calls a “quadruple chance to win”. Click here to see how.

Those who contribute $ 1,000 Mountain diary Will: 1. Be able to select one of Hall’s five soothing river scenes, part of his acclaimed Greater Yellowstone Suite Series, available in limited editions giclee. 2. Know that part of the contribution is tax deductible (MoJo is a 501 (c) (3) non-profit organization). 3. Your charity will help expand MoJos reporting on critical environmental issues that threaten the ecological integrity of Greater Yellowstone. And 4th last and maybe best: The selected painting with a frame inspired by the Californian craft tradition can either be hung on the donor’s wall or given as the perfect Christmas gift to a loved one or friend. (Fine arts are one of the most memorable gifts ever). 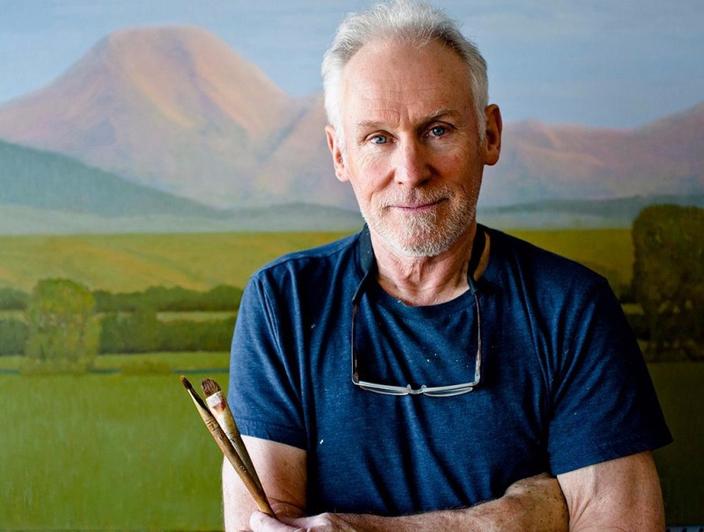 Dave Hall in the studio

“I’ve followed Hall’s development as a painter for several years and he is known as the ‘Greater Yellowstone River Painter,’” says Mountain diary Founder and journalist Todd Wilkinson, who has been writing about natural art for more than 30 years. “There is nothing better than a landscape painting to deepen the visual impact in a room and to reflect a person’s love for nature. These pieces are small jewels and speak for the high conservation values ​​that characterize our region. What an honor to have someone with Dave Hall’s talent as a partner in promoting great journalism. ”

Wilkinson and Hall first met almost a decade ago at the Taft-Nicholson Environmental Center in Centennial Valley, Montana, when Hall was artist in residence. Today, Hall divides his time between Salt Lake City, where he once taught at Rowland Hall, and a retreat in the woods around Island Park, Idaho, not far from the shores of Henry’s Fork.

“We are losing the essence of Greater Yellowstone and the pace began to accelerate amid Covid which brought in a flood of more people,” Hall said. “One of the best and most effective lines of defense, if we have any hope of saving the uniqueness of the area, is to have a well-informed public that is sufficiently committed to protecting Greater Yellowstone,” said Hall. 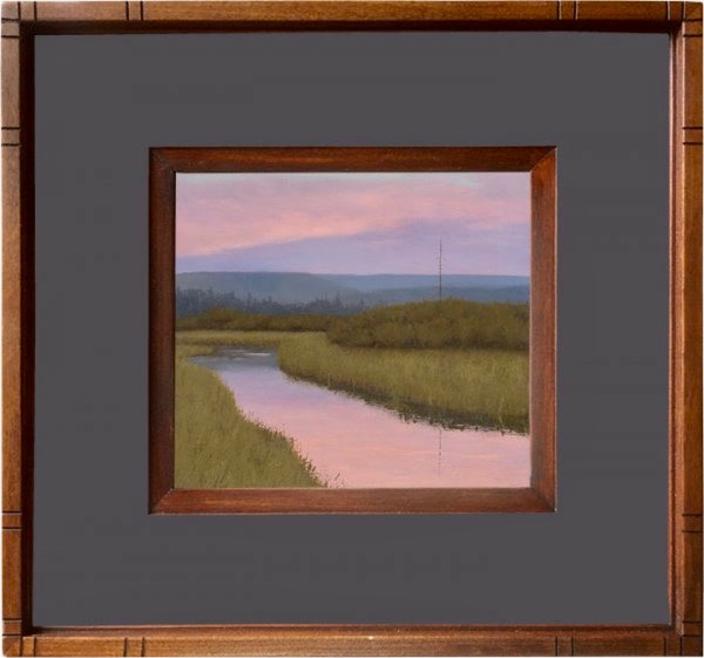 Each artwork comes with a stylized frame inspired by the Californian craft tradition and designed by Hall himself.

“I see Mountain Journal and its factual reporting as a positive force. It is designed to keep readers more informed and to inspire them to be more interested. The most important thing in conservation is to know what is at stake first, ”he adds. “Mountain Journal does this as well or better than most nonprofits – and ironically, its stories speak for why conservation is important and why it needs support.”

Below are the five paintings and a description by Hall in his own words of what inspired them. As the Christmas season is approaching, they will surely be in demand. “I’m honored to be able to offer 25 paintings – five signed reproductions of my favorite from the past two decades,” says Hall. “All 25 are archival prints on canvas. I designed the frame from the mid-20th century Californian landscape artisan frames. I did all the dyeing and finishing. “

Click here to take a look at Hall’s extensive portfolio of new works that are now part of large personal and commissioned collections.

“Dusk on the Henry’s Fork is a large painting, ”notes Hall. “I painted it in an afternoon, which is very rare for me. I tend to be more methodical while being aware of the mood. dusk has developed a life of its own. “ 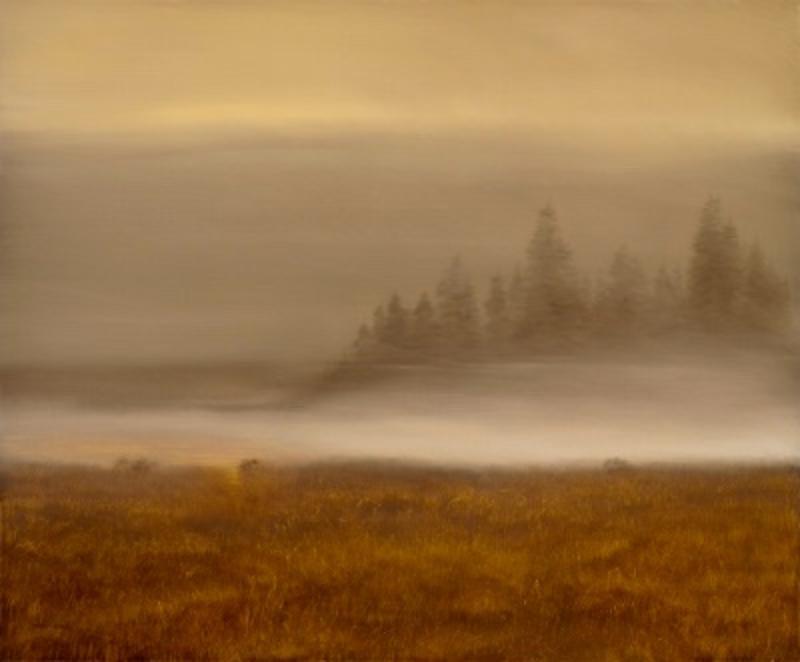 # 2 Tomorrow on the North Fork (under)

“Tomorrow on the North Fork was painted after walking alone below Big Springs in the western area of ​​Greater Yellowstone. I forgot my bear spray which added to the experience. I like the palette – more lively than much of my work. “ 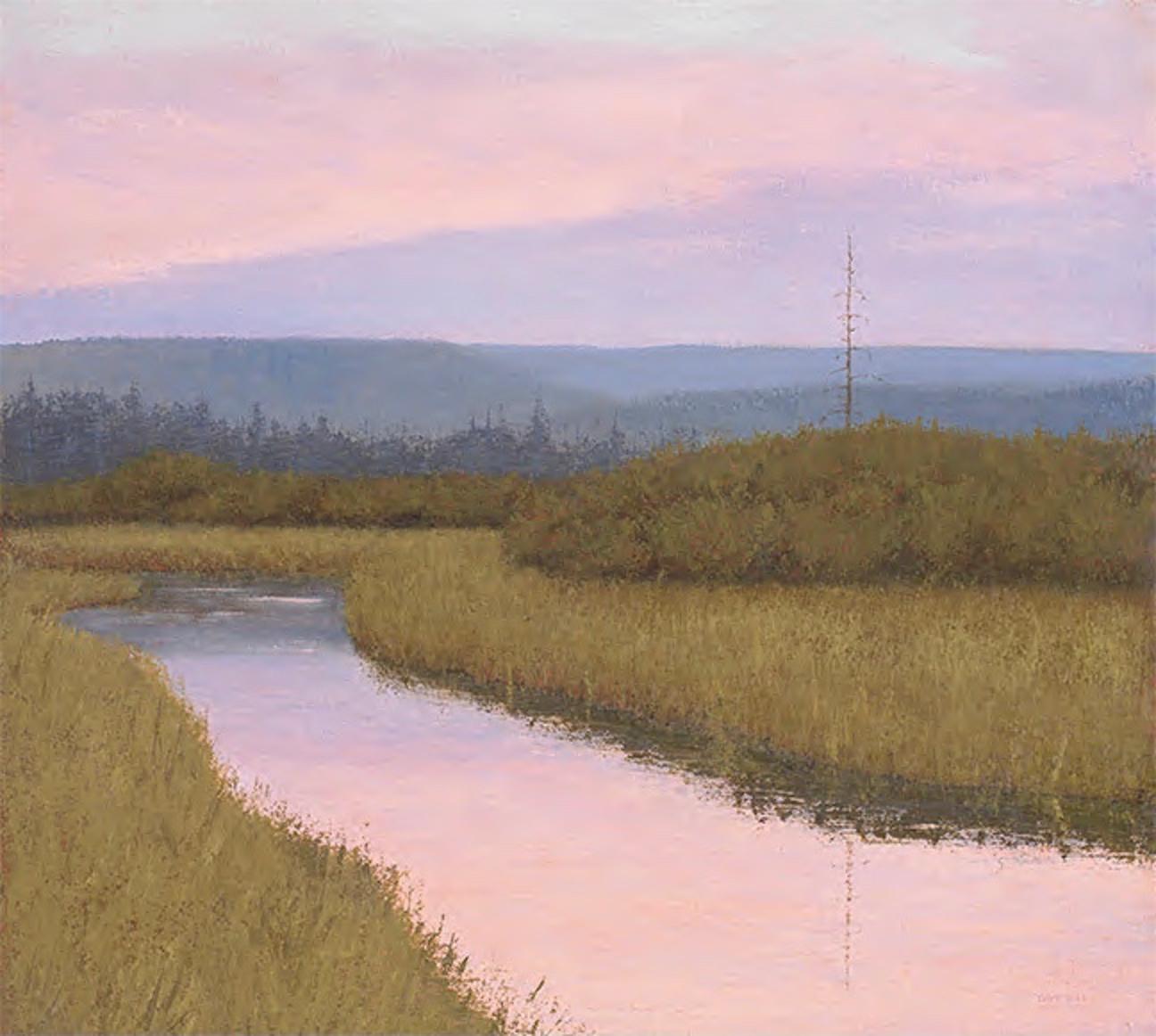 # 3 Thinking about the flow (under)

“Think about the river was painted for auction in support of the Henry’s Fork Foundation. It represents favorite spots on the river where I spend most summer days and long for trout to come up. It’s a rare midday painting. “ 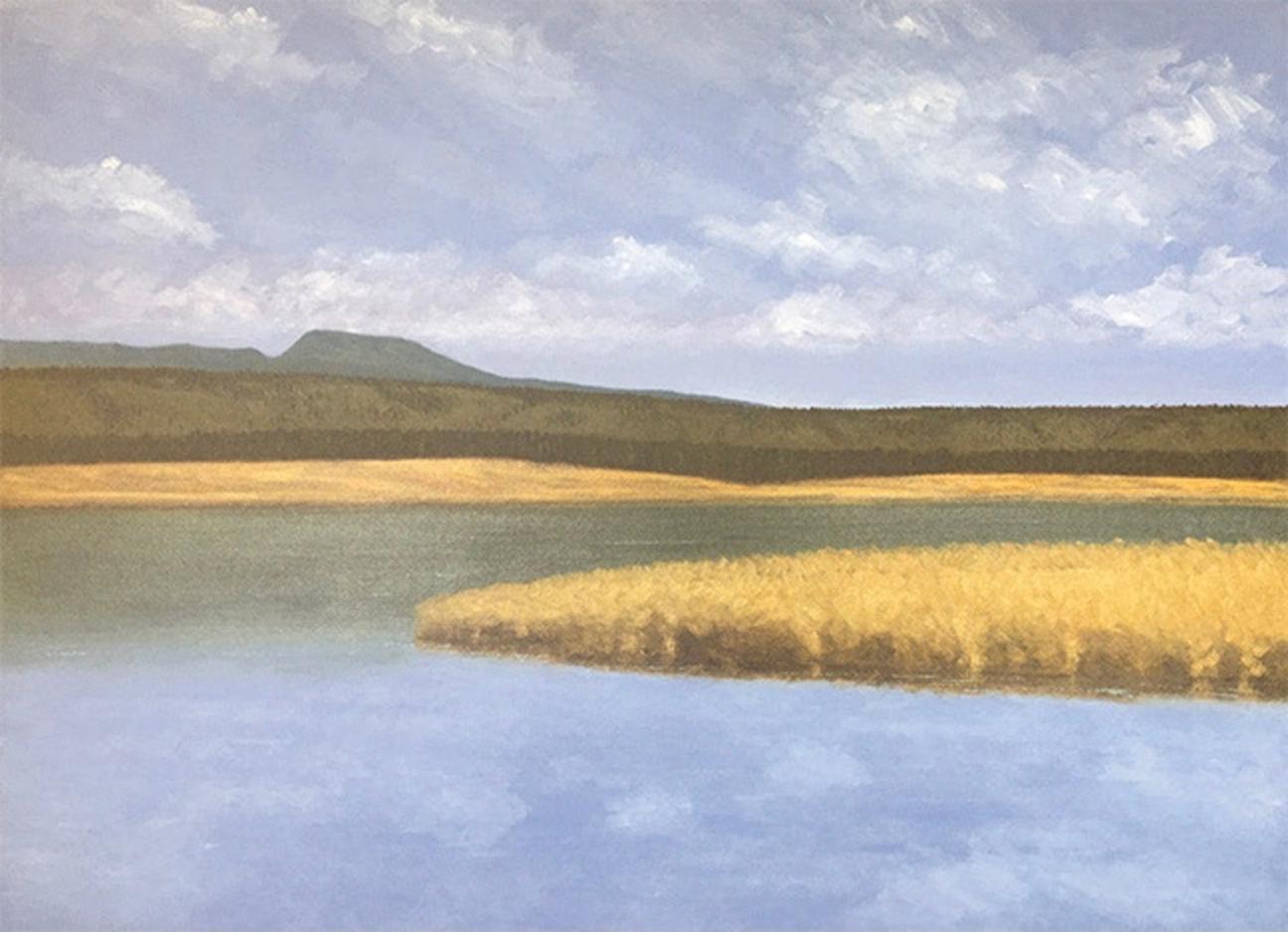 The summer comes is not a specific place. It was painted in early spring as I looked forward to summer’s mayfly hatches. I love the early morning mist on the moving waters of Greater Yellowstone. 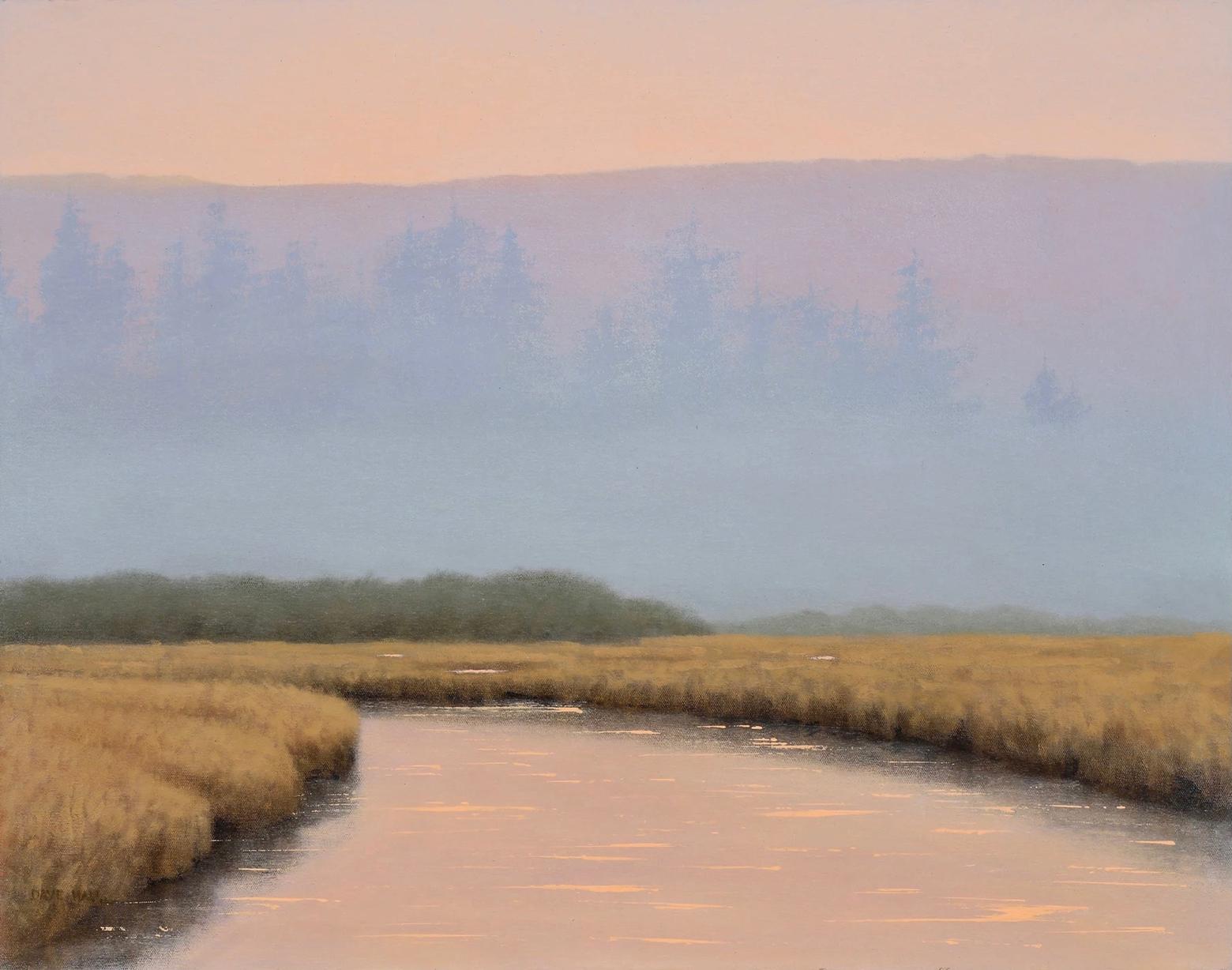