BRANFORD, CONN. – Just one lot – a painting offered without reservation – was the only thing standing between Fred Giampietro and “white glove” status for New Haven Auctions’ April 2-3 auctions. Over the weekend he offered 415 lots from the Stephen & Patricia Center’s Scarborough, Maine collection and the following day another 345 lots from various owners. Giampietro said the sale exceeded expectations, raising $1,250,000.

“I think there are a lot of new buyers out there; there’s no question about that,” Giampietro said when Antiques and Art Weekly caught up with him after the sale. “Many of the buyers are names I’ve never heard of before. In at least three cases, it was younger people who were just starting out with the purchase and wanted advice. A young man interested in a table asked about investment value and ease of use. It’s a retraining process: This group of buyers uses a different set of metrics, including the cost of new stuff. They are also keenly aware that one of their most valuable commodities is time so they scour the internet looking for an auction house they can trust to buy from and this has brought more people to the market.

“On the other side of the coin, there are collectors who create room for anomalies in both rising and falling markets. In this market, some collectors look for things without any problems.”

His first point: The best lot of the weekend was bought by a buyer who had never bought at auction at New Haven Auctions. Andy Warhol’s “Golden Mushroom” (1928-1987), a color screenprint numbered 206 from an edition of 250, surpassed its high estimate, fetching $46,875. The print had been put up for sale by a couple who had recently started buying at Giampietro’s auctions.

“[It was] the first thing I took from the house of the center. It was just amazing,” Giampietro said, referring to a paint-decorated spice chest that had been estimated at $1/2,000 but fetched $16,250, fetching the highest price from day one on sale. Created in Maine circa 1850, the piece had only a few very minor touch-ups and one button replaced.

Also from the Center’s collection and one of the surprises of the sale was an early 19th century New England turned and painted bowl measuring 6 inches high and 20 inches in diameter. Not only did it retain its original gray exterior color and whitewashed interior, but it was undamaged. Estimated at $250/$500, bidding on the piece started at $100 but quickly escalated, eventually rounding down to $12,500.

Giampietro considered a folk art peacock carved as if standing on a book and attributed to the carver Bernier of Biddeford, Maine, as “a masterpiece in the category”. It fits into a small group of his most ambitious carvings, all on books. It’s great that we know who did this; In the realm of American folk carving, there really are very few. The rarity is incredible.”

Consigned by an anonymous seller and shipped across the block on the second day of the sale, the 26½-inch piece fetched $17,500, more than double its low estimate and the second-highest price of the weekend.

High on the center’s sales were birds in a variety of mediums and sizes. Most notable was a Canada Goose decoy carved by Frank Finney (American, born 1947), described in the catalog as “fine original condition”. It sold for $10,000, more than 12 times its high estimate, and was one of just a dozen Finney birds in the auction, all selling for between $1,125 and $4,688.

The weekend’s second-highest prize of $17,500 was shared by a large horse and a surly cast zinc and iron weathervane that retained an exceptional verdigris finish. Consigned by an anonymous seller, it quickly surpassed its estimate of $10/15,000.

Weathervanes were also a category that the centers enthusiastically collected, as 14 in all were offered, most in either horse or bird form, with a few fish flags and flags for good measure. Best selling for $10,000 from a single owner was a molded copper-gilt wing-spreading eagle flag with direction of arrow attributed to JW Fiske of New York City about 1890.

Boxes, a perennial favorite among folk art collectors, came in a variety of shapes—wall, rectangular with or without feet, and oval with a lid. All in the auction had a common theme: decoration, whether carved or painted. The highest price for a carved box was $8,750 for a late 18th-century wall box with heart and pinwheel decoration; it had an early patina and only a small repair. A rectangular box with a lid and similar decorations and stars followed for $1,875.

For framed art, the sessions were each headed by a painting of a fish from the Center’s collection, sold at $4,375 at an estimate of $300/$800, and a pair of portraits of William and Ester Powers by C. Hartt of Buffalo, NY, circa 1840. William holds a bodice while Ester holds strawberries. Rendered in oil on canvas and measuring 23 x 19-1/8 inches in gilded wood frames, the pair found a new home for $15,000.

On January 8th-9th, New Haven Auctions offered two sessions of property from David Good’s collection, but there was more property not previously offered that crossed the auction block on Sunday, April 3rd. Notable findings from Good’s collection included a three-color slip-decorated bowl, which turned to $10,625, a 19th-century folk art theorem with Shenandoah Valley house decoration in its original frame, which drove bidders to $13,750, and a iron diamond-bladed spatula engraved with EP Sebastian on its neck, which rose to $8,750 from an estimate of $1/2,000.

New Haven Auctions will be holding a two-day sale in June. One session will feature part two of the Center’s collection, the other will showcase a collection of American folk art from Salisbury, Connecticut.

The prices shown include the buyer’s premium stated by the auction house.

The top lot on sale was Andy Warhol’s “Golden Mushroom” with bids warming up to $46,875. Both parties involved – seller and buyer – made their debut at New Haven Auctions, underscoring the importance of new buyers ($20/$30,000). 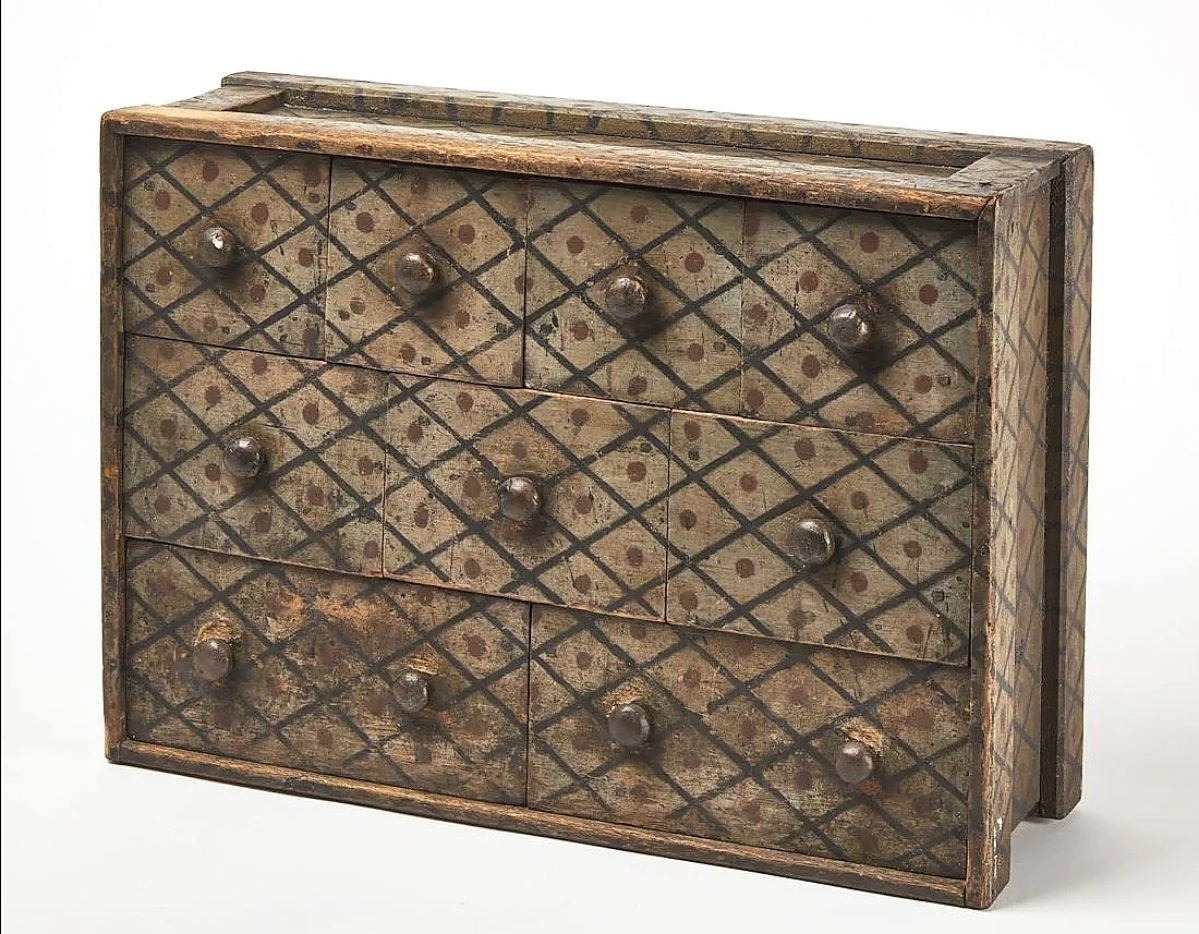 “It was just incredible. It was the first thing I took out of the center’s home,” said Fred Giampietro of this paint-decorated spice chest with forged nail construction, made circa 1850 in Maine, from the Center’s Collection ($000). 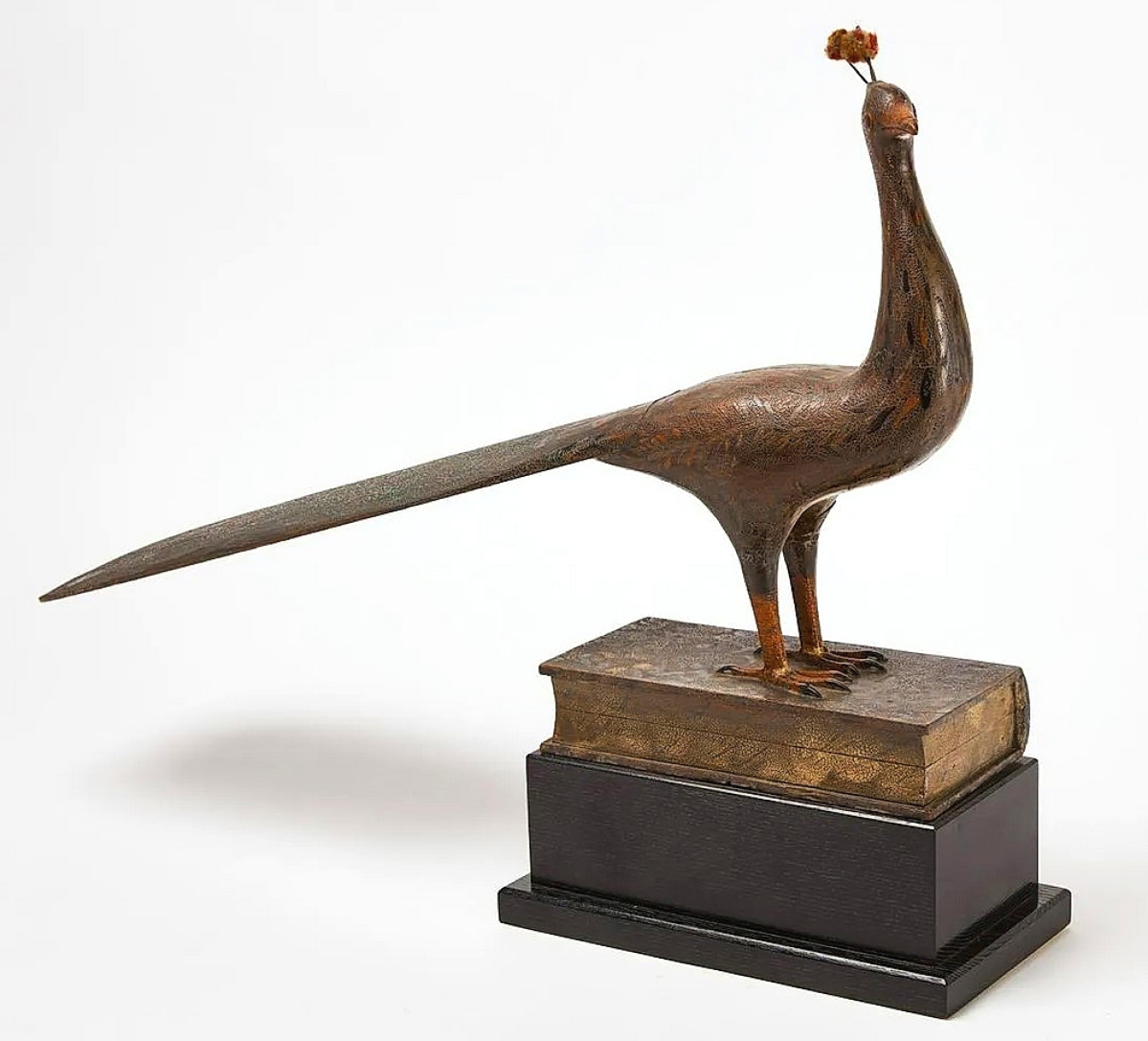 “I think it’s a masterpiece,” said Fred Giampietro of this carved peacock in a book attributed to the carver Bernier of Biddeford, Maine. “The rarity is incredible.” It was sold to a telephone bidder for $17,500 ($8/12,000). 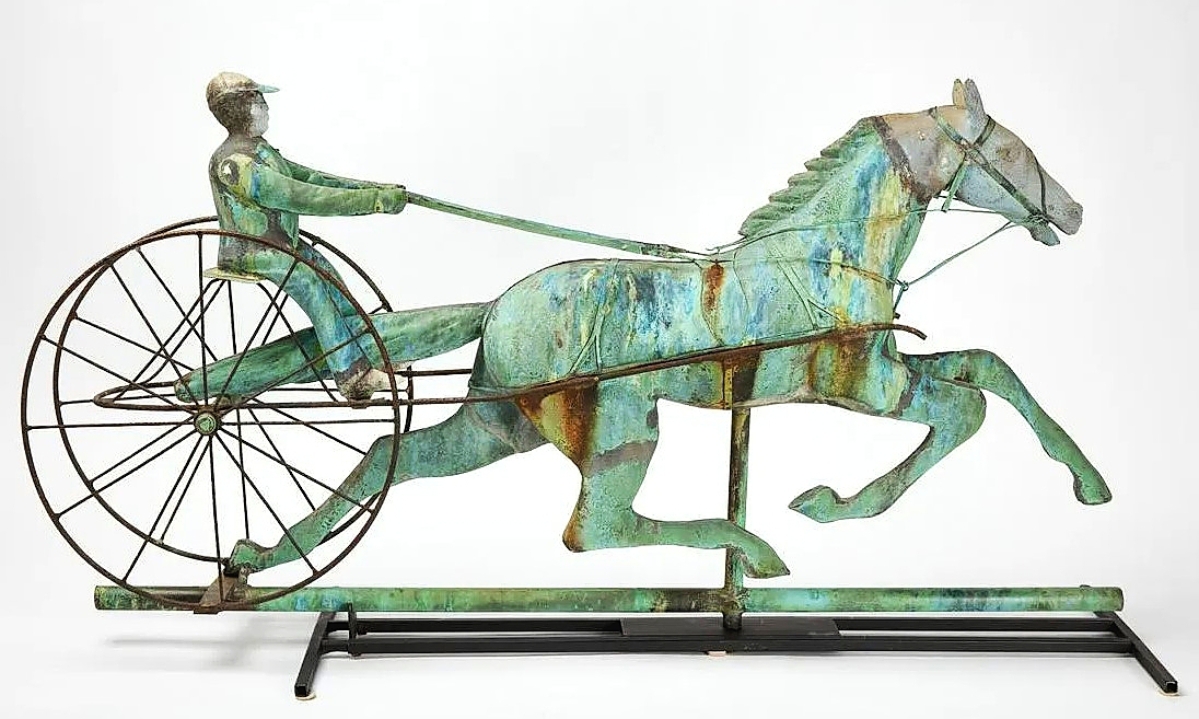 The highly detailed and sculpted copper, cast zinc and iron horse and surly weathervane dates to around 1880 and retained a verdigris finish which the catalog described as ‘extraordinary’. It came to $17,500 ($10/15,000). 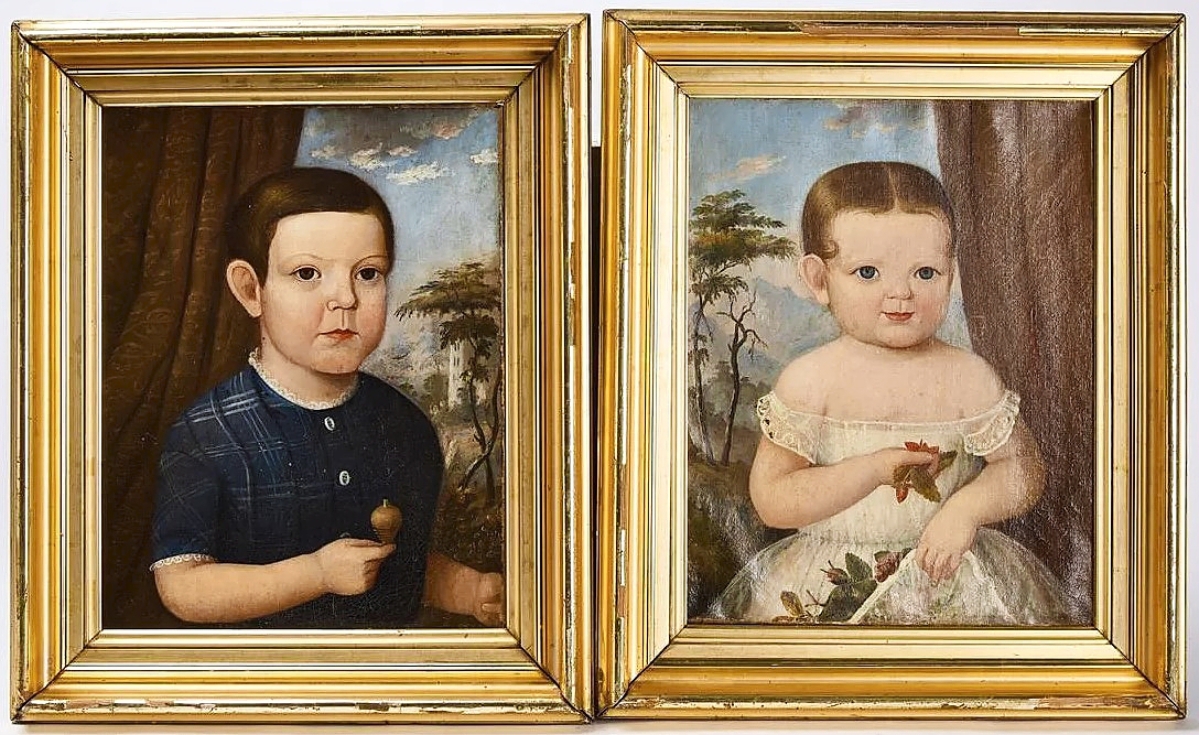 The catalog did not specify how much this Buffalo portrait pair of William Powers and Ester Powers by C. Hartt fetched when sold at Christie’s in New York City in 1999, but Fred Giampietro put an estimate of $2.5/5,000 She. The two charmed bidders who brought her up to $15,000. 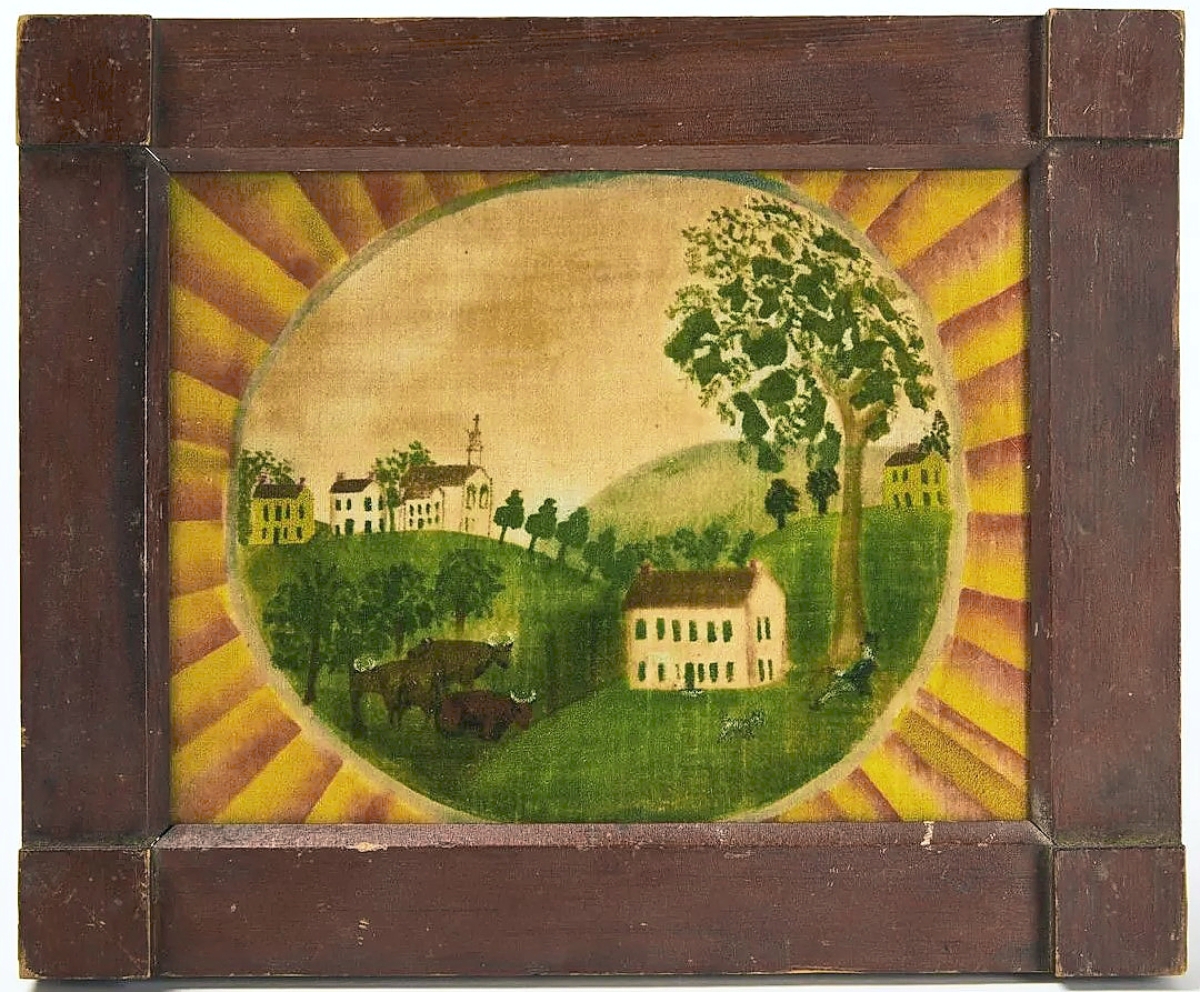 Some pieces from David Good’s collection were offered at the April 3 session. This Shenandoah Valley, Virginia theorem of a village in a sun-drenched setting was one of the top lots, fetching $13,750 ($1.5/$3,000). 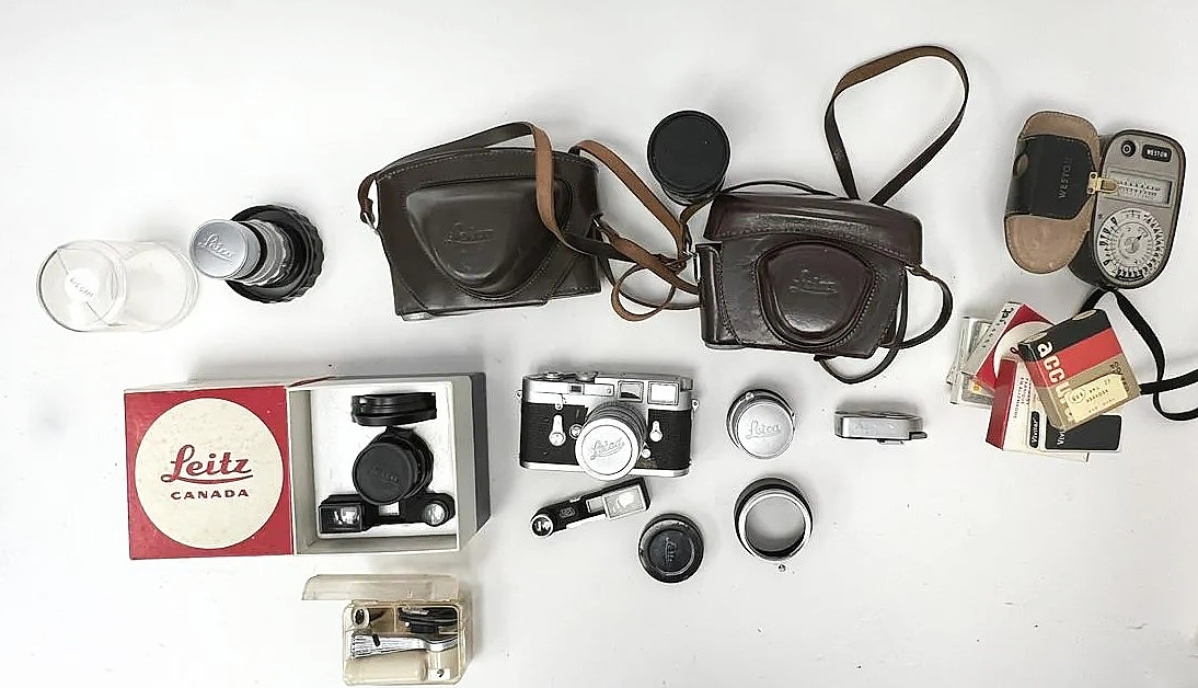 With an estimate of $200/$400 and a result of $13,750, this group lot of Leica camera gear must have contained something rare and desirable. 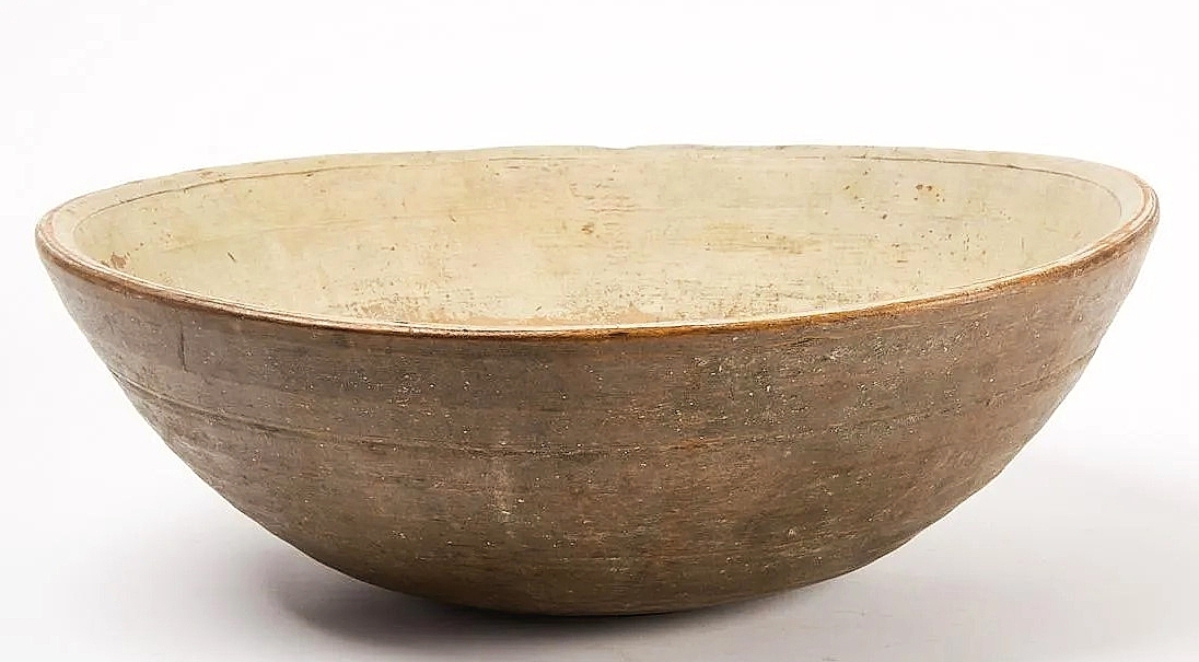 The $12,500 this turned and painted 19th-century New England bowl fetched was, to quote Fred Giampietro, “a total surprise,” although the large bowl — it was 6¼ inches high and 20¼ inches in diameter — in Original undamaged condition with gray exterior paint and a whitewashed interior ($250/500). 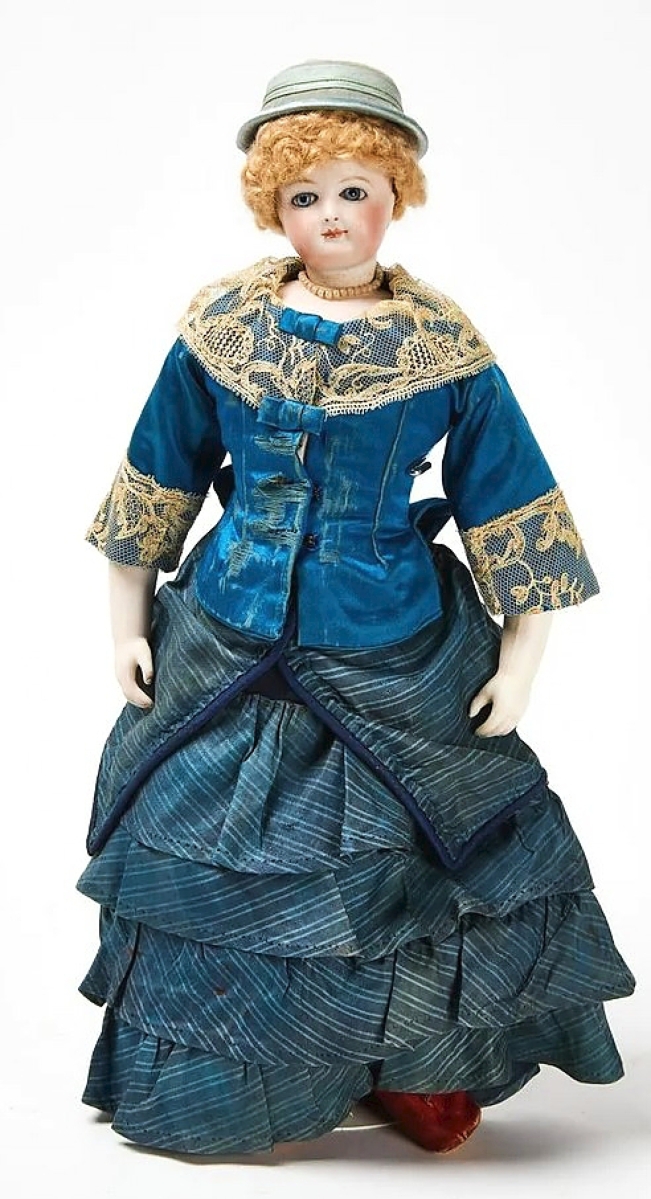 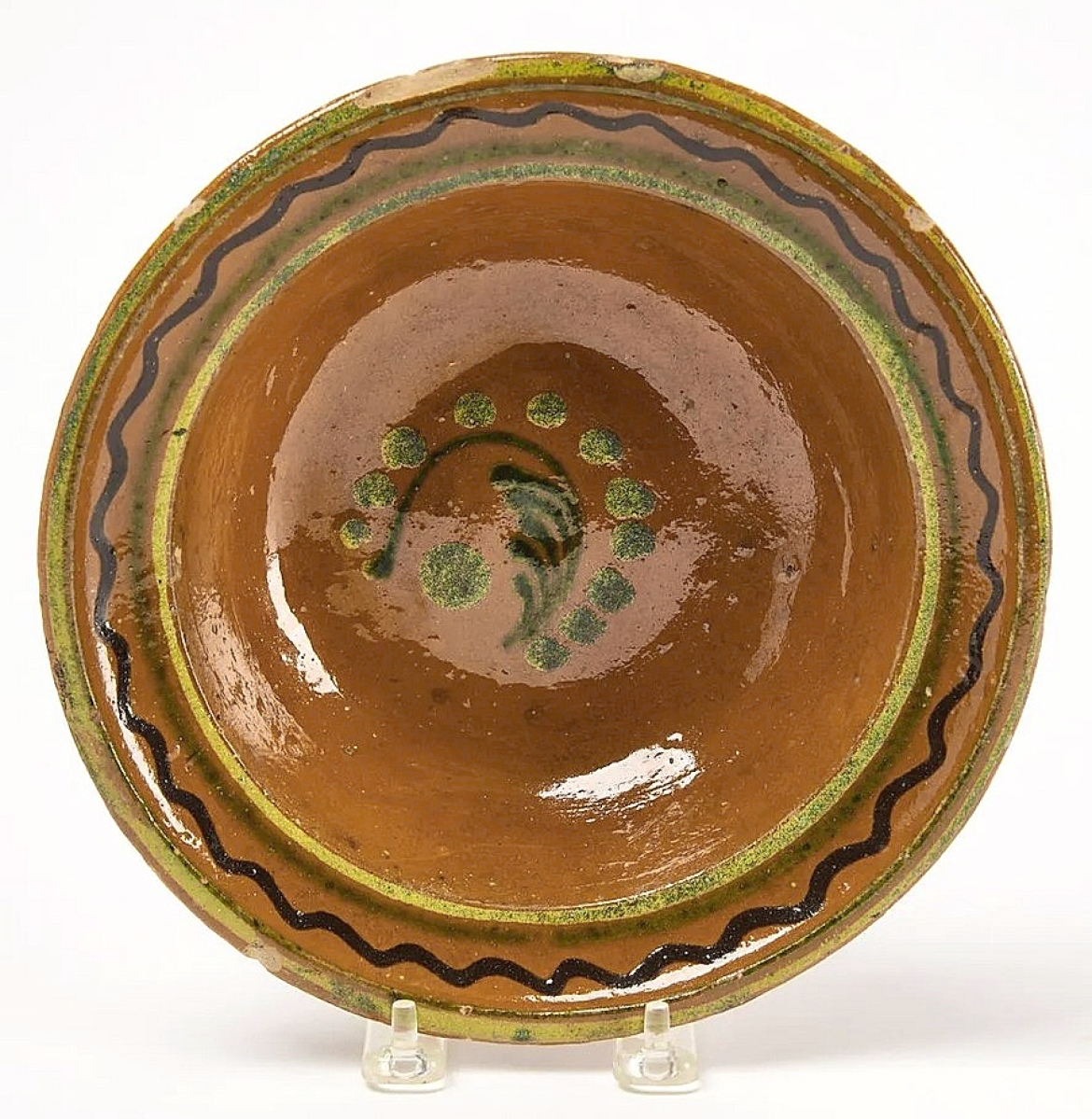 This 8¾ inch rimmed tricolor slip dish attributed to Maryland was from the collection of David Good but was otherwise fresh on the market and fetched US$10,625 ($400/$800) despite a chipped rim. 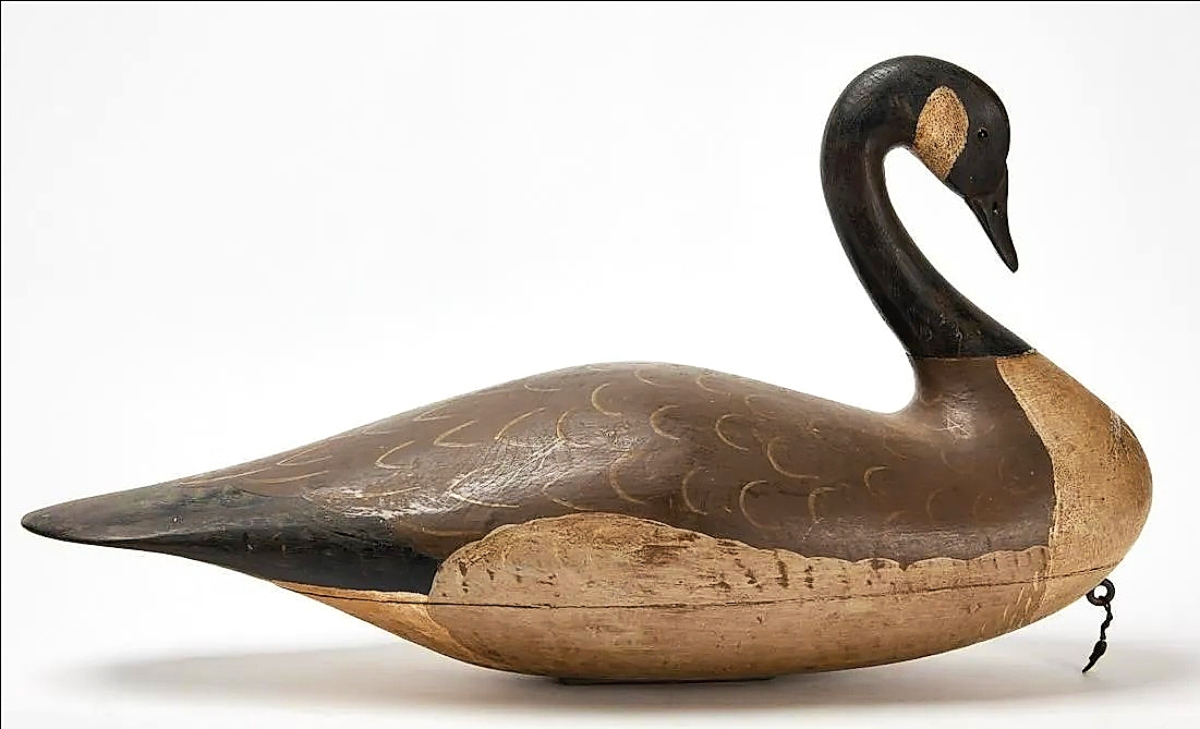 This Center Collection Canada Goose Decoy was carved by Frank Finney and was one of a dozen Finney carved birds offered for sale. Estimated at $400/$800, it caused quite a stir among bidders and ended up at $10,000. 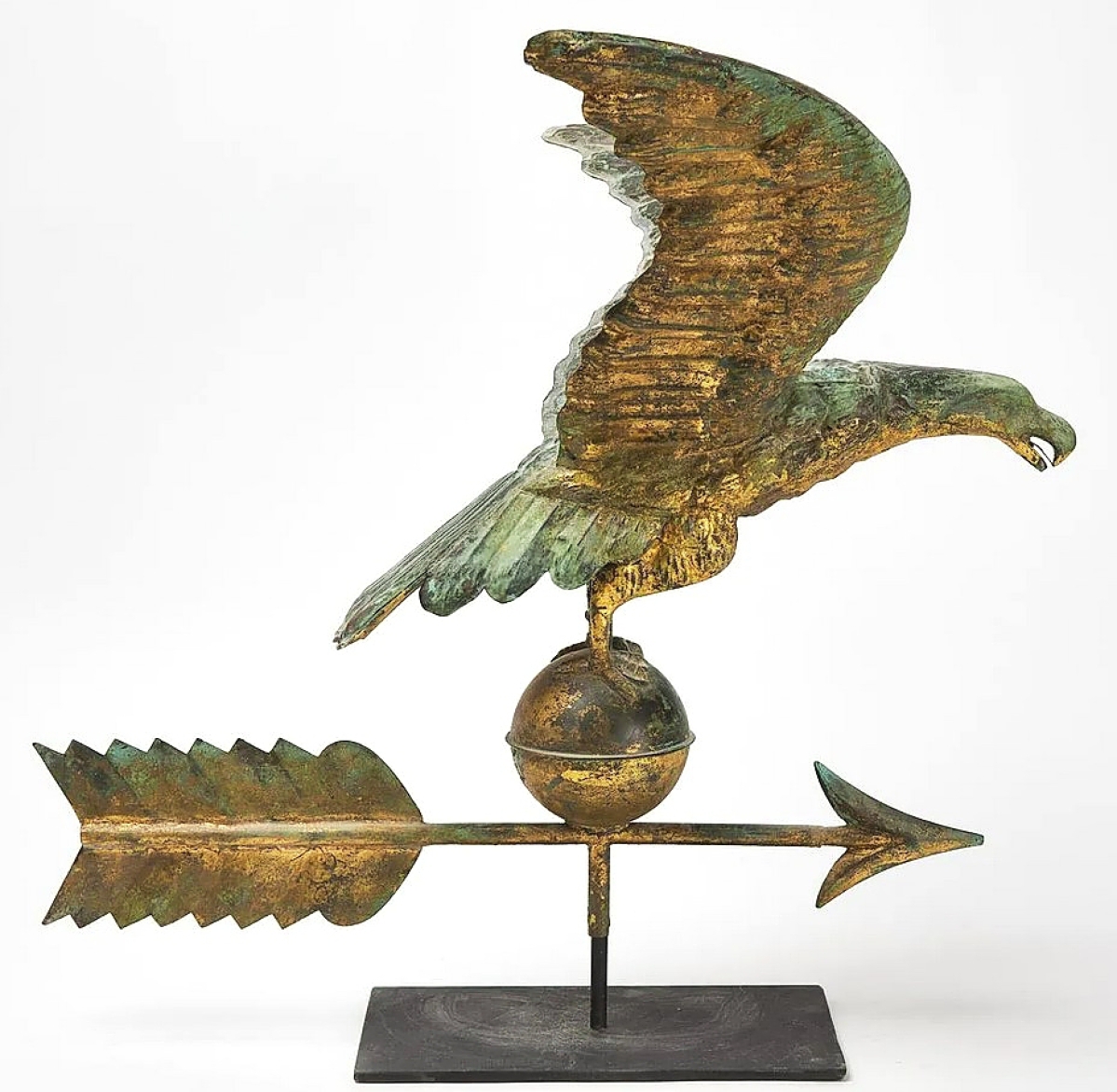 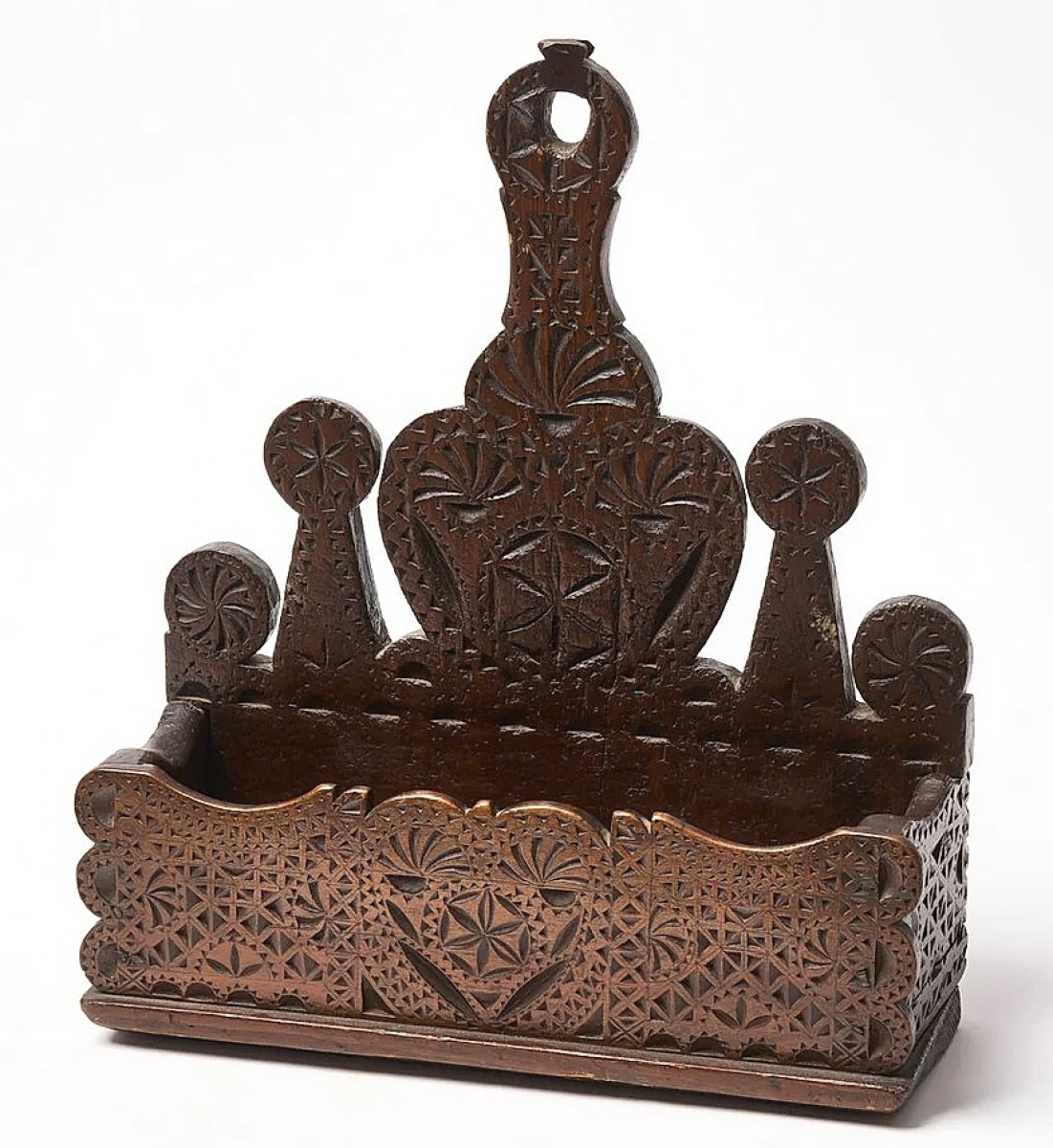 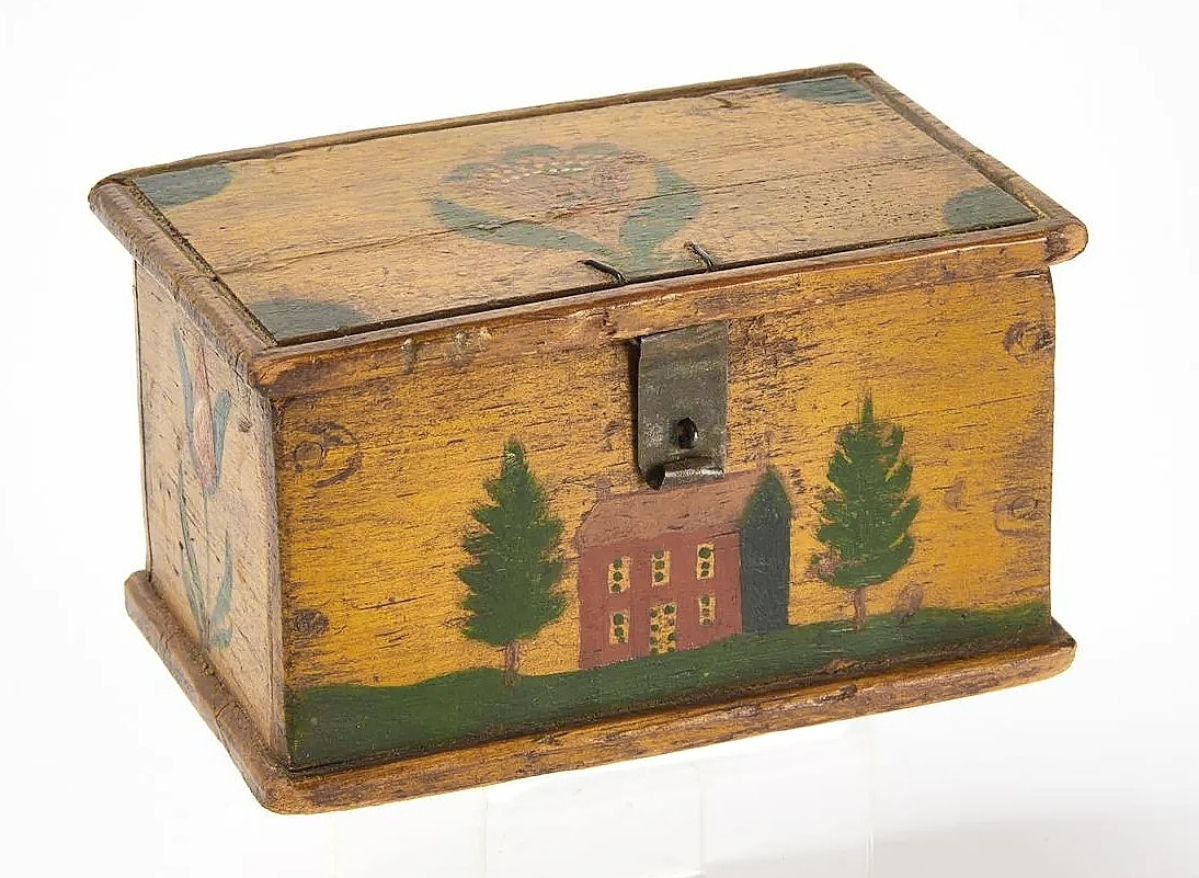 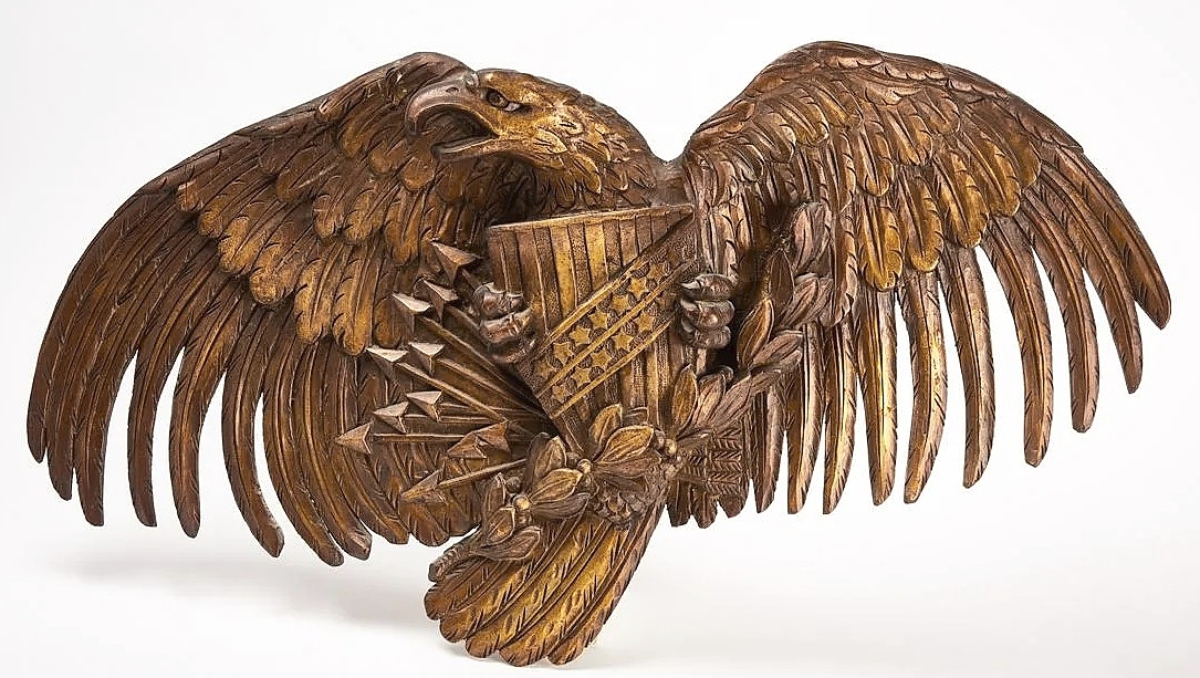 This carved eagle with shield plaque, in its original gold paint and dated late 19th century New England, fetched $6,250. It was from the Center collection ($500–$1,000). 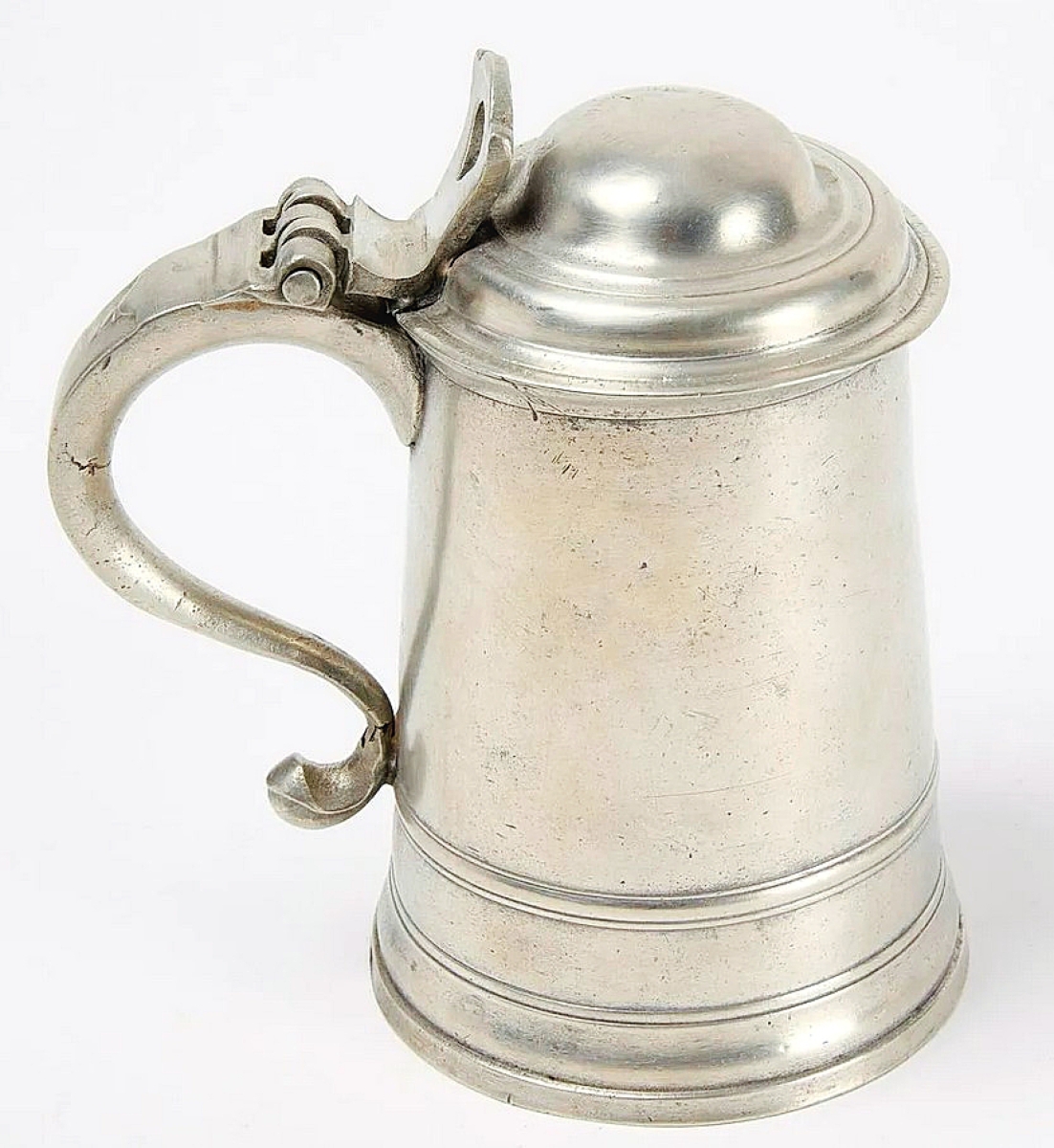 The center’s collection included almost 20 lots of pewter. This pitcher from William Will, Philadelphia, had a lid repair but still led the group to finish $6,250 ($3/$6,000).